While travelling around the old trading town of Kainsk, established 1722, we found the unusual monument. It is located near the “Old” local cemetery on the outskirts of the town. This is the monument to Kainsk residents who died in WW2. 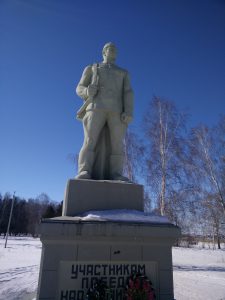 Monument to the WW2 fighters in Kainsk

What is unusual is that it was built by the local resident, private person, not by the state or corporation. And it was done in 1980-1989.  While this is not absolutely unusual, such situation is rare. 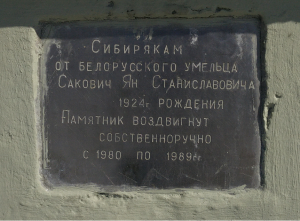 Plaque on the monument

And what we were surprised to find that the name of the local resident who built this is not googlable.
We are putting here the photo of the monument, exact location of the monument, photo of the plaque listing the full name of  builder, and its transcript.
The local legend says he was known locally as “millionaire”, and was driving around the town on the old German motorcycle.
We think such persons should be remembered.

To Siberians from Belarus craftsman Sakovich Yan Stanislavovich, born 1924. The monument was built with [my] own hands from 1980 to 1989.
And we are back in Omsk archives researching the fate of hundreds of thousands persons who died in 1937-1938 Stalin purges. Omsk Federal Security Service archive is the largest repository of documents related to this, and is barely touched by researchers.